Looking for authors with a twisted sense of dental humour. You could be professional or a patient as long as you rock.

Scripts with author bio via email or contact form.

Should You Use a Mouthwash? 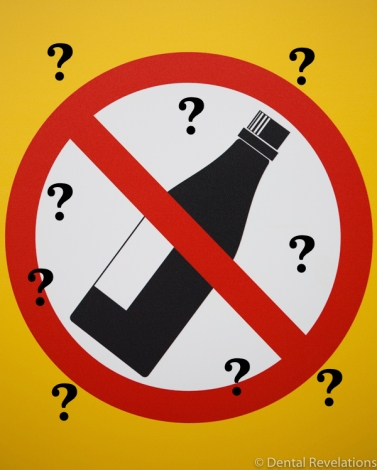 If you are a patient and you ask this question from two dentists there is a BIG chance that you will get two answers. The other shows you the green light and the other the red.

So no wonder it leaves patients confused if us professionals are too.

If you have a good oral hygiene – brushing twice a day and cleaning between the teeth most nights – and you use a fluoride toothpaste there’s no reason to use a mouthwash.

But there are exceptions – naturally!

Remember that in both of these cases you should choose the alcohol-free version.

Dangers of Using a Mouthwash

If you use a mouthwash that has alcohol (ethanol, but I’m going to use the word alcohol instead) levels of 25% or higher and you have been using it since your teenage years the studies state that you have higher chances for getting an oral cancer.

One leading brand (the one that rhymes with word blistering) can have alcohol levels as high as 26% and this high level is thought to be toxic for gingival tissues when used in abusive amounts. But – and it is a big but – why do they add alcohol to the mouthwashes when it is a known fact that for alcohol to be toxic for bacteria it must be used at 40%? This means that there is no help from alcohol levels as low as 26% but it can still be harmful to the gingival tissues.

If you use a mouthwash containing CHX for a longer period of time it will stain your teeth. Stains can be removed but it will cost you of course.

In my professional life I have noticed that for some unknown reason the leading blistering-rhyming mouthwash stains the teeth with some patients even though it doesn’t contain the CHX. Actually the looks of the stains is different to those that build up from the CHX. After a thorough interview of the patient no other explanation was found to the stains than the mouthwash the patient had been using. The staining stopped once the patients stopped using the mouthwash.

Alcohol in mouthwashes can dry the mouth and the dry mouth is prone to halitosis. People often seek help from the mouthwash for the halitosis but it can actually make the matters worse.

Wouldn’t it be the wisest thing to do if you DIDN’T use a mouthwash whilst us professionals argue about the health risks of the mouthwashes? It’s your health that is gravely at risk if the alcohol in mouthwashes is proven to be harmful.

I have seen patients who are going through the cancer treatments for oral cancer and I have seen the 50% of them who survived the cancer. I can tell you that it’s not a pretty sight. Not during the treatments or after surviving it.

Why would you play a Russian roulette over your health? I wouldn’t and therefore I am not using any mouthwashes.

If You Still Want to Use a Mouthwash

I really don’t get it how we cannot decide if the mouthwashes containing alcohol should be recommended or not. It’s just ridiculous that even inside one dental practice opposite recommendations are given to the patients.

What all of us professionals agree is the fact that alcohol is an aldehyde and it is metabolised by the oral bacteria to acetaldehyde which is carcinogenic in humans. Carcinogens cause cancer! And yet we argue about the risks of using an alcohol containing mouthwash.

What are the reasons behind all this? Some have suggested that some of the dental professionals have financial commitments to the manufacturers of the mouthwashes. I must emphasise that this is a hearsay. But if you have read my previous post about the integrity amongst dental professional you understand that everything is possible.

If you are interested to read about groundbreaking study about the risks of using the alcohol containing mouthwashes (one that caused a mayhem amongst dental professionals) visit here.